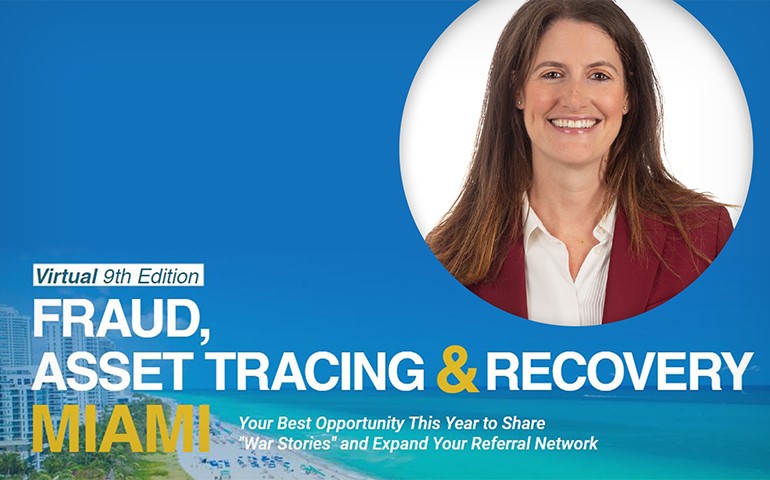 25 January 2021: CYK Partner Lydia Danon reports from the event in Miami where she spoke on “The Finer Points of Navigating International Arbitration: Non-Parties, Depositions and Injunctions.”

Lydia Danon was invited to speak at C5’s Fraud, Asset Tracing & Recovery Miami conference at the end of October 2020. As the conference was virtual, Lydia could not make it to Miami but, from the comfort of her living room (the new Miami) and capitalising on CYK’s success in the Court of Appeal case A, B v C, D, E [2020] EWCA Civ 409, she spoke on “The Finer Points of Navigating International Arbitration: Non-Parties, Depositions and Injunctions.”

The distinguished panel comprised Lydia, Sebastian Said (Partner at Appleby Cayman and Door Tenant at Fountain Court) and Jonathan Addo (Partner at Harneys, BVI). The three provided a whistle-stop tour on the relief that can be sought / obtained in support of arbitration in their respective jurisdictions.

Lydia navigated the muddy waters of the possibility of an English tribunal granting a freezing injunction against an arbitral party but, given that the law is unsettled (see the case law surrounding s.39 of the Arbitration Act 1996 (“the AA Act”), she warned against taking this course. Lydia encouraged an application to the English High Court where a party would fare better, depending on the merits of the application of course.

Particular focus was given to the English Courts’ approach to applications for an injunction or an order against a non-party to an arbitration, whether situated in the jurisdiction or not. Recent case law (2020) reaffirms the long-held position that the English Court remains unwilling to grant an injunction against a non-party in any circumstances. It has been acknowledged that s.44 of the Act (Court powers exercisable in support of arbitral proceedings), could create a lacuna whereby a third party takes steps to thwart an arbitration by: i) issuing near identical proceedings (anti-suit injunction); ii) or seemingly assist in the dissipation of assets (freezing injunction) but that does not justify reading words into the Act that are not there. Other solutions must be found to keep that third party at bay.

However, A, B v C, D, E [2020] has opened up new territory with the Court of Appeal making an order for “the taking of evidence” of a third party witness, something that had previously been denied to an arbitral party (s.44(2)(a) AA). The Court of Appeal found that it would be unusual in a dispute for all the witnesses to be connected to a party. Further, it would be odd if this section only applied to witnesses connected to witnesses connected to the parties to the arbitration, as it would mean a party would be looking to compel its own witness or one from the opposing side, witnesses who should already be in the party’s control.  The Court was keen to stress that, in making its findings, it was not extending the scope of s.44 AA generally, but there has been much commentary as to what this decision will mean for the future of applications before the Court under s.44 AA Act. Watch this space!